There are some places which I visit regularly, not because of their photographic potential but simply because I enjoy being there.Â  One such place is the Swannery at Abbotsbury.Â  It is situated at the end of the Fleet, a lagoon which lies behind Chesil Beach. Â Usually swans are very territorial and do not nest in close proximity.Â  However, availability of food and the brackish water make such ideal conditions for rearing young that they tolerate each other and assemble in numbers.

The Fleet was formed after the last ice age, so it is likely that swans have nested there for thousands of years.Â  In medieval times, there was a monastery at Abbotsbury and the monks took advantage of the easy availability of swans as a source of meat.Â  There were strict religious dietary requirements which only allowed the consumption of fish on some days.Â  Apparently, the meat has a fishy flavour so the monks applied some inventive logic.Â  If it tastes like fish, it must be fish.Â  As a consequence, they actively managed the colony, a practice which continues to this day.Â  Not that anyone eats swan these days and the place has become a tourist attraction.

While I find the setting to be calm and restful, there is more to a photograph than that.Â  Public access is restricted to specific areas and opening hours do not coincide with the best light. Â Swans are large, heavy birds which makes flying strenuous.Â  Take-off requires a long, energetic run-up across the water and landing also requires space for the bird to come to a halt.Â  Seeing a swan in flight, while not rare, is not that frequent either.Â  That limits the opportunities for action shots, especially as swans moult during the summer and are flightless for around six weeks.

The challenge is to find something a bit different.Â  In the spring, when they are laying their eggs, swans are not very active.Â  They seem to spend most of their time resting so when I was there earlier this year I took some close-up shots.Â  Then, as often happens, I moved on to something else and forgot about them.Â  I came across them again when I decided to enter my clubâs annual monochrome competition.Â  It is a good one to do as entry is limited to prints, my preferred medium for the presentation of photographs.Â  I had two images which I knew I wanted to enter, but needed a third.Â  For a while, I was going to use one of a staircase at the Tate Britain building, but that is becoming a common subject these days.Â  The swan it was to be. 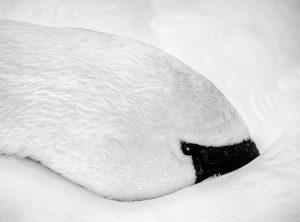 Swan
(Click on the image for a larger version)

I had taken the shot with the swanâs head level in the shot and wanted it at more of an angle.Â  Rotating it removed more from the image than I wanted and resulted in too tight a crop.Â  I needed to create a bit more space around the head and neck.Â  Photoshop has a very useful Fill function, which has got me out of trouble on more than one occasion.Â  I enlarged the canvas and used Fill in Content Aware mode to fill the empty space.Â  Fortunately, the swanâs body consists of similartextures and it worked well.Â  It is not a technique I would expect to be successful in all circumstances.

Head at the desired angle, I headed off into Nik Silver Efex Pro for the monochrome conversion.Â  It remains the best software I have found and Googleâs cessation of support is a concern.Â  At some point, it will probably stop working if it becomes incompatible with another software providerâs update.Â  Being mainly white, swans make a good subject for monochrome and I opted for a high key effect.Â  Finally, I added a catchlight to the eye.Â  It was not there in the original but judges, without exception in my experience, always want to see one. Â It is a dilemma.Â  Pictorial purity or marks?Â  I went for the latter.

My first attempt at printing was not a success.Â  I chose a lustre paper and set the longest edge to 36 centimetres, my standard size for competition prints.Â  It was way too large for such a subject and the paper unsuitable.Â  I eventually settled for 24 cm and a matte paper, Fotospeedâs Smooth Cotton 300.Â  It is one of their Signature papers, which bears Joe Cornish’s name and has his endorsement.

I finished it off by setting it in a mount made using Dalerâs Cumulus Cloud mountboard.Â  It is not a pure white and has a swirly texture, which I like.Â  It sets the print off very well.Â  Normally the orientation of a print and mount work best when there is an alignment of their longest edges.Â  That works less with a small print in a large mount, which is 50 cm x 40 cm as is customary at camera clubs.Â  I rotated the mount through 90 degrees so its shortest edge went against the longest edge of the print.Â  Too central a positioning within the mount would have looked too static, so I weighted it towards the top. 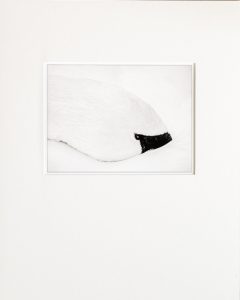 A picture is worth a thousand words. The mounted print.
(Click on the image for a larger version)

So how did my makeweight image do in the competition?Â  The rules state that the monochrome contest is only open for new work.Â  In a sense, one of my images was not new.Â  I have had it in competition elsewhere and it has always done well.Â  It was, though, the first time I had used it at my club.Â  If there is one thing predictable about judges, it is that they are unpredictable and there is no such thing as a certainty.Â  Predictably then, while it got a reasonable score, it was the least favoured of my submissions. That said, it is this shot and was the most daring/riskiest of the three compositions.

The swan?Â  Well that came top.