I have long known of Ctein, first encountering him in a Luminous Landscape video, but mostly through his contributions to Mike Johnstonâs blog âThe Online Photographerâ (TOP), which has been one of my regular reads for several years.Â  Â Mike Johnston started the blog in 2004 and is still going strong, posting interesting articles most of which are photography related on most days.Â  Impressive stuff.Â  This blogging business might look easy, but there are a lot of people engaged in it and few achieve that kind of success.

Ctein used to write regular articles for the blog and still makes frequent comments.Â  When he says something, I find that it is usually worth paying attention.Â  When he offered a meeting to TOP readers while on holiday with his partner Paula in London from their native California, I took advantage of the opportunity.Â  A number of us gathered yesterday in the cafÃ© at The Photographersâ Gallery, which proved to be an excellent venue.

Those who have not heard of Ctein will probably be wondering about his name.Â  It is his full legal title and pronounced âKuh-tineâ.Â  If you Google him, you will find that nowadays he is better known for co-authoring a science fiction book, âSaturn Runâ, with novelist John Sandford.Â  Part of Cteinâs role was to ensure the science was correct, although it was a genuine collaboration with both writing different chapters.

An enjoyable afternoon ensued.Â  Ctein is a professional printer and he showed us many examples of his work.Â  These included quite a number made by the fiendishly complex, costly and time consuming dye transfer process, which is now effectively obsolete as Kodak has long since ceased production of the raw materials.Â  I do not have sufficient knowledge to go into the details here, but a search engine will readily find Cteinâs expansive description.Â  One of my questions was to ask him how long it took.Â  Two days would have been good, but typically it was more like a week with one particularly tricky print taking three weeks.Â  Ctein has 300 prints produced over 30 years, an average of 10 a year.

Is all that effort and associated expense worth it?Â  Emphatically yes.Â  The resulting prints are like nothing I have ever seen, with rich tones, colours and depth.Â  Ctein says the latest inkjet printers are starting to approach a similar quality, but are not there yet.Â  To be able to hold so many of those gorgeous prints and examine them closely was a privilege.Â  From Cteinâs perspective, those 30 years taught him a lot about colour which has stood him in good stead in the digital age, although I doubt that few would be prepared to go through such a long apprenticeship.

The afternoon was also a âshow and tellâ.Â  Another photographer brought along a proof copy magazine which he had produced using Blurb about an Irish traveller community.Â  Another person had the proof of a book of photographs from Somalia which he had taken over the period of ten years.Â  I had a number of prints, many of which Ctein seemed to like and three of which are going with him on his return to California.

All in all, a very enjoyable afternoon, meeting not only Ctein but several UK based photographers. 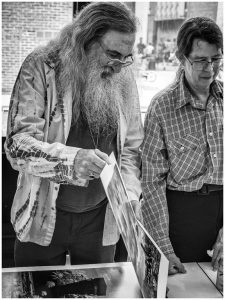 Ctein, partner Paula alongside, showing one of his digital prints