Is it really possible to get good results from a lens based on a design dating from 1928 and produced by the Russians at the height of the Cold War?Â  There has long been the suggestion that Soviet production standards were not particularly high during that period.Â  Supposedly, there was significant sample variation and defective lenses could get through quality control.Â  Suffice to say, every manufacturing process has a level of inconsistency.Â  Even today, lenses from the same production line in a modern factory will not perform identically.Â  What hope, then, for the Helios 44?Â  A lens made by the bucketload and which was as cheap as chips.

What follows is not really a lens test.Â  I simply wanted to see how the lens performed in a specific circumstances and that is what I report here.Â  Shooting resolution test charts does not hold much attraction.Â  For me, it is the look and technical quality of the final image which matters.

The Helios 44 has a 58 mm focal length and a maximum aperture of f/2.Â  It is based on the 90 year old Carl Zeiss Biotar design.Â  It appeared in many versions and was the standard lens for the Zenit range of SLRs.Â  Due to their low cost, those cameras were the introduction to photography for many people in the heyday of film. Literally millions of the lenses were produced over a period which spanned decades.

The original Carl Zeiss factory was in Jena.Â  It ended up behind the Iron Curtain in East Germany after the Second World War.Â  Having access to the tooling and the remaining personnel who did not flee to the West at the end of the conflict, the Russians had a basis from which to create their country’s nascent camera industry.Â  Exports were one way by which they could acquire much needed foreign currency.

These days, the Helios 44 has a cult following. Supply is plentiful so they are still inexpensive.Â  That said, the popularity of adapting older lenses for use on modern digital cameras has seen prices increase over the last few years.Â  Cheapness alone would not be sufficient unless there was something special about the lens.Â  And indeed there is.Â  The principal attraction is the way the lenses render out of focus areas or bokeh as it is frequently called.Â  Most people who adapt lenses will have at least one example of a Helios 44 in their collection.

There is supposed to be a swirly effect, although I do not often see it.Â  From other reports, it seems that is a fairly common experience.Â  I am shooting the lens on a Fuji X-E2, which has a crop sensor and only uses the central part of the lens where aberrations are less likely.Â  However, even having the lens on a full frame camera appears to make little difference.Â  It seems to depend on circumstances.Â  And maybe the stars being in a correct alignment as well.Â  Some claim that the preset 44-2 version of the lens gives he best results.Â  Since I do not currently own one, I have not been able to test that assertion.Â  Not that I am particularly concerned as I suspect the swirls are more likely to be a distraction in the eventual image.

There is a lot of information about the lens on the Internet.Â  And being the Internet, some of it is contradictory.Â  The Camerapedia entry at the link below gives details of the various models.Â  It is worth noting that there are a significant number of 44-7 fakes around.Â  That version has a reputation of being the sharpest and prices are accordingly higher.Â  Achieving the increase in resolution was somewhat two edged as it meant correcting the faults which gave rise to the swirl.Â  Many Helios 44-7s are quite likely to be other models with a faked name plate.Â  Caveat emptor.

The lens I acquired is a 44M, which was the first one with a switch for auto or manual aperture operation.Â  The first two digits of the serial supposedly indicate the year of manufacture, which dates mine to 1979.Â  The lenses were made in different factories, with the one in my possession coming from the KMZ production line.

While I refer to it as costing Â£23, I won it in an eBay auction with a Â£15 bid.Â  It came with both end caps which is not always the case for such an old lens.Â  Postage was a rather hefty Â£8, which I suspect deterred a number of other prospective buyers.Â  Not only that, the seller was not especially prompt in dispatching my purchase.Â  Overall, the total cost was similar, or possibly a bit lower, to what other 44Ms in a similar condition were fetching at the time.Â  In seeking to make a profit on the postage, the seller could well have received less overall.

As well as the lens, I needed an adapter.Â  The ones which I generally use are made by K&F Concept and are good value.Â  It is possible to buy cheaper ones or pay more, but the K&F adapters are deservedly popular.Â  Most Helios 44 lenses have a M42 screw mount and I already owned an adapter.Â  If I had bought one specifically for the purpose, my total outlay would have been around Â£40.

So how does my Â£15/Â£23 lens perform?Â  Below is an uncropped frame which shows St Catherine’s Chapel seen through a specially hole in the trees which are growing in the Abbotsbury Subtropical Gardens.Â  The lens was focused at infinity, aperture was f/5.6, the shutter speed 1/500 and ISO 1600.Â  Exposure compensation was one stop over to optimise the sensor’s performance.Â  The image is taken from the Raw file and there has been no post capture processing applied in Lightroom, my Raw processor of choice.Â  It was a dull overcast day, so the ambient light was not giving me any favours.

Compared to modern lenses, older lenses tend to render an image which is lower in contrast.Â  That said, it is easy enough to boost it afterwards.Â  Still, that is part of the fun of using older lenses for the differences in rendering compared to newer designs. 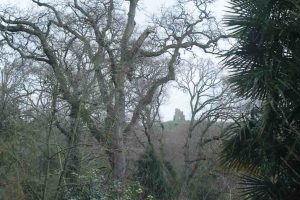 Image from Raw file without any adjustments applied in Lightroom.
(Click on the image for a larger version)

Overall, the lens has done well.Â  There is fine detail in the branches at the centre of the frame and there was very little purple fringing.Â  It is there, but I had to look for it.Â  I must admit that surprised me. It can easily occur in this type of shot and even happens with the most expensive lenses.Â  It is not really an issue and is easy to remove during post processing.Â  The branches at the edge of the frame are not quite as sharp but are still acceptable.Â  True, with a crop sensor only the central sweet part of the lens is in use but edge definition is often less important.Â  Few shots require edge to edge sharpness.Â  On the contrary, a bit of softness at the edges can help the subject stand out.

The two following images show the central portion and left hand side of the shot.Â  Both are as shot with no manipulation. 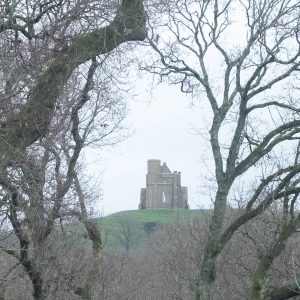 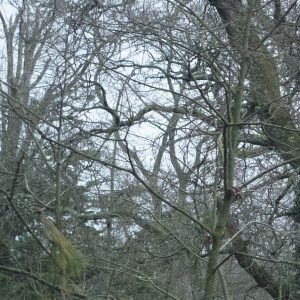 With post capture sharpening and the addition of Clarity, the detail becomes very clear.Â  In this processed version of the central portion of the image, it is possible to make out the bars in the windows of the chapel, which is around a quarter of a mile away. 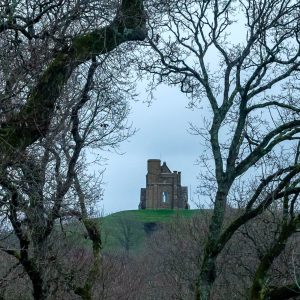 Earlier in this article, I mentioned that a principle attraction of this lens is not how sharp it is, rather how it renders the parts of the image which are not in focus.Â  Typically that involves shooting subjects at close distances and using maximum aperture.Â  In other words, the complete opposite of what I have done here.Â  That imposes a different set of challenges.Â  A lens which is sharp for distant subjects does not necessarily perform as well close to.Â  And vice versa.Â  Also, most lenses are sharp when stopped down but wide open can be a different matter.Â  That is the aspect which I cover in a second article, which can be read here.